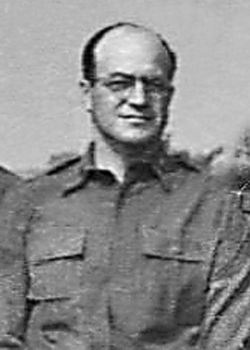 Biography:  Ralph Darrow Weible was born on June 19, 1912, in Fargo, North Dakota. He was the son of Dr. Ralph Emerson Weible and Mary Hope Darrow and attended Fargo Central High School. After graduating, he continued his education at Yale University but would graduate from North Dakota State University in 1934. He then went to the University of Minnesota Medical School, where he graduated in 1938.

With his schooling complete, Ralph worked as a Physician at the Dakota Clinic, located in Fargo. In 1939, he married the former Mary Ann Volk, "Ann", who was born in Minneapolis, Minnesota, and was the daughter of Henry Volk and Hazel Babcock. The couple made their home in Fargo.

Service Time:  Ralph was called upon to utilize his medical skills in the Medical Corps. 1st Lt. Ralph D. Weible was ultimately assigned to the Medical Detachment of the 607th Tank Destroyer Battalion on October 28, 1942, as their Surgeon. He replaced Captain Harry D. Silsby who commanded the initial group of five medical personnel, which had been transferred into the 607th from the 7th Infantry Division's Field Artillery Battalion. Ralph was promoted to the rank of Captain on May 19, 1943.

The unit was stationed at Camp Hood during the winter of 1942-43 and then proceeded to Camp Ibis, California in the Mojave Desert and the Desert Training Center. Ralph continued in his position throughout their training within the U.S. and shipped out with them aboard the USS Wakefield, when it set sail for England from the Boston port. The unit shipped out on January 2, 1944, and arrived at Gourock, Scotland, on the 11th.

In a history written by Ralph, on June 30, 1945, he mentions that from April 22 to May 21, 1944, they were stationed in Macclesfield, England, where they operated an aid station in the Armory located there. During the short time they were there, they were able to gather the necessary equipment and supplies they would need before moving to Camp Barton-Stacey in Hampshire, England, where they secured the necessary vehicles they would need for transport of the wounded, their medical equipment and supplies.

He also mentions that during their time in combat, the most seriously injured personnel would be evacuated through Infantry Aid Stations to minimize the delay of their treatment. The 607th's Aid Station was located near the Battalion's Command Post and HQ Forward areas and not near the front lines so only lightly wounded and sick men were brought there.

The 607th boarded transports and disembarked at Utah Beach on June 17th through the 23rd. They supported the advance on Cherbourg and fought along the Seves River in July. Participateing in the drive to Le Mans and envelopment of the Falaise Pocket in August,  they advanced to the Moselle River in September and supported operations against Metz through November. The unit converted to a self-propelled battalion equipped with M36s in time for the final assault.

They then joined the drive toward Saar River, the capture of Saarlauten, and subsequent fight against the Siegfried Line in December and were then deployed to the Ardennes sector in January, 1945. The 607th were committed against Siegfried Line again in February in the Schnee Eifel and supported the capture of Koblenz in mid-March. Crossing the Rhine River at Boppard on March 25th, they sliced through Hessen and Thüringen during April and reached the Czechoslovak border near Plauen by mid-April. Thereafter, they remained in defensive positions. The unit received credit for campaigns in Normandy, Northern France, Rhineland, the Ardennes and Central Europe. 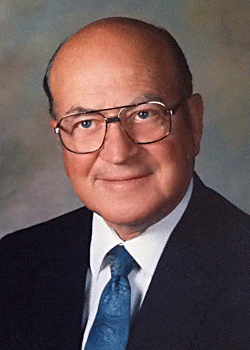 After returning to the U.S., Ralph also returned to Ann and the Dakota Clinic. In addition to his medical practice, he would also serve two terms as President of the medical staff of St. John's Hospital and as President of the First District Medical Society. In 1972, he was appointed Medical Director of American Life and Casualty Insurance Company. He retired from the practice in 1977. He and Ann had 3 children, 1 daughter and 2 sons.

In his spare time, Ralph enjoyed, fishing, hunting and raising retrievers. He also found time to participate in the American Legion, Rotary Club, Century Club, the Fargo Country Club, American College of Physicians, and the American Society of Internal Medicine.

Ralph passed away on June 13, 2002, and his ashes were scattered. I want to thank Ralph's grandson, Kurt, for providing the information and photos for this tribute.