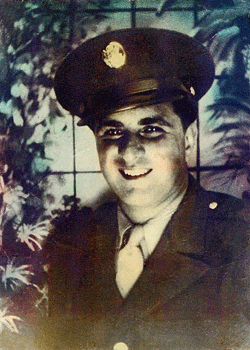 Biography:  James Robert Montenegro, "Monte", was born on October 25, 1917, in the Bronx, New York.  He was the son of Italian immigrants Generaso and Maria Montenegro and attended the New York Industrial High School, graduating in 1934.  Monte  found work as the Produce Manager for Gristedes Brothers in New York City and married the former Millie Palumbo in 1940.  She was also a native of New York City, but was born in Manhattan.  The couple made their residence in the Bronx and welcomed their first child, Jimmy, born in 1943.

Service Time: Monte entered the service on August 19, 1942, and was assigned to the 802nd Tank Destroyer Battalion.  He remained with the unit, receiving credit for all five of the unit's campaigns, Normandy, Northern France, Rhineland, Ardennes-Alsace and Central Europe.  On December 18, 1944, Monte was wounded when he was shot in the stomach and another bullet grazed his head.  At some point, he transferred into Company C of the 813th Tank Destroyer Battalion and finished out his term of service with that unit.  He left the service from Fort Dix, New Jersey, on November 29, 1945, at the rank of Sergeant.  Monte received the Purple Heart, EAME Medal, WWII Victory Medal, American Service Medal and the Good Conduct Medal and Army of Occupation Medal.  One of the mementos he brought home from the war was a Spanish 9mm pistol, produced by Spain to support the Nazi war effort. 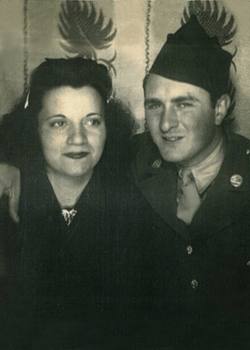 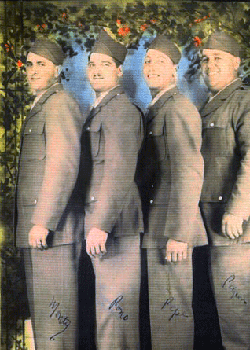 The photo above left shows Monte and his wife, Millie, on Christmas of 1943 while they were in Waco, Texas.  At the time, she was pregnant with their first child.  Monte wouldn't see that child until he was about 2 years of age.  The photo on the right shows Monte on far left with three friends from the Bronx, NY.

When he returned to the U.S., he went back to Gristedis Supermarkets and worked as their Produce Manager.  He and his wife welcomed a second son, Richard, born in 1947.  In his spare time, Monte enjoyed gardening and sports, including fishing.  His favorite sports teams were the Mets and the Jets.

The following document is the inscription Monte wrote to his grandsons in the Bible he carried during the war.  The Bible was a gift to them.

Monte passed away in August of 1995, and was buried in the Ferncliff Cemetery in Hartsdale, New York.  I want to thank Monte's grandson, Greg, for the above information and photos of his grandfather.