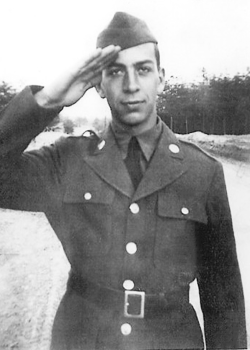 Biography:  Robert Thomas Pyle, "Bobby", was born on January 18, 1920, in Denver, Colorado. He was the son of Samuel Thomas Pyle and Sarah L. Lockwood.  At some point, the family moved to Virginia and Bobby eventually graduated from Graham High School in Bluefield, Tazewell County, VA. He had three sisters and two brothers.

Service Time: Bobby enlisted in the Army and entered service on April 9, 1941, at Roanoke, Virginia. He was assigned to Company A of the 629th Tank Destroyer Battalion. The battalion was established at Fort Meade, Maryland, on December 15, 1941. The photo at left was taken at Ft. Meade that same year.

Bobby trained with the unit at a number of military facilities within the U.S., including camps located in Florida, California and Texas before receiving orders for overseas shipment. They shipped out from the New York port on January 1, 1944, and arrived in Liverpool, England, on the 9th.

After six months of additional training, they boarded transports and shipped to Normandy, France, disembarking at Omaha Beach on July 2nd. They were equipped with M10 tank destroyers and performed artillery missions in the Caumont sector. They joined the 30th Infantry Division in the fighting at Mortain in early August, and then supported the reduction of the Falaise Pocket.

The 629th participated in V Corps parade through Paris on August 29th and then advanced to Luxembourg by early September, supporting operations in the Hürtgen Forest and against the Siegfried Line. They shifted to the Ardennes sector on December 24th, and fought to eliminate the Bulge in January, 1945. The unit joined a renewed assault on the Siegfried Line in February and crossed the Rhine River into the Remagen bridgehead on March 11th. They converted to the M36 tank destroyer that same month.

On March 12th, Company A was supporting the attack of the 393rd Infantry Regiment. Co. A, along with a platoon of Recon. Co., fired on enemy aircraft and were able to shoot down a German ME 109 in the vicinity of Linz, Germany. Bobby received a gunshot wound to the head. Official records list him as being only lightly wounded along with three other men from A Company, Pvt. Fausto Pate, Sgt. William J. Dunaway and Pfc. Robert L. Wright. He was evacuated to the 128th Evacuation Hospital in Euskirchen, Germany, but sadly, he died of his wounds.

Bobby was awarded the American Campaign, Good Conduct and World War II Victory medals along with the EAME medal with credit for the campaigns of Normandy, Northern France, Rhineland, Ardennes-Alsace and Central Europe.  He was posthumously awarded the Purple Heart Medal.

Technician 4th Grade Robert T. Pyle was ultimately buried in the Henri-Chapelle American War Cemetery, Hombourg, Belgium, Plot G, Row 13, Grave 59. I want to thank the Pyle family for providing the information and photos of Bobby. I want to thank Des Philippet for the use of the grave marker photo. 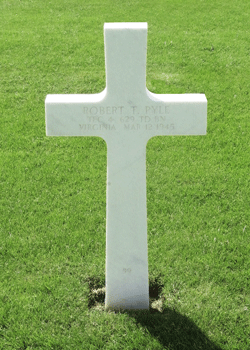