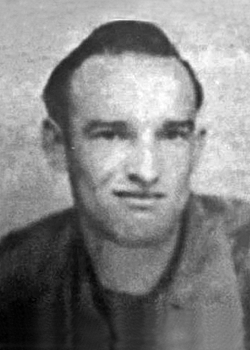 Biography:  Omer LaFrance was born on June 13, 1920, in Fort Kent, Maine. He was the son of Alexandre LaFrance and Alphonsine Boucher and attended local schools through the grammar level. He later worked as a lumberjack. His enlistment record says that he worked in the manufacture of paper and wood pulp.

Service Time:  Omer entered the service on January 17, 1942, at Fort Devens, Massachusetts. He was assigned to the 601st Tank Destroyer Battalion. The unit shipped out from the New York port on August 2, 1942, aboard the Queen Mary. They arrived at Gourock, Scotland, on the 7th.

The reconnaissance company landed at Oran, Algeria, on November 8th as part of Operation Torch, and the rest of battalion arrived in December. They fought in Battle of Kasserine Pass in February, 1943, and at El Guettar in March. The unit converted to the M10 at the end of the North Africa campaign and then participated in invasion landings at Salerno, Italy, on September 9th.

The 601st made their assault at Anzio on January 22, 1944, and entered Rome in June. They then conducted their fourth assault landing in southern France on August 15th and advanced to the German border in the Vosges region. They participated in the reduction of the Colmar Pocket in February, 1945, and then converted to the M36 tank destroyer. Battling along the Siegfried Line until crossing the Rhine on March 22nd, they helped capture Nürnberg in April and ended the war occupying Hitler’s retreat at Berchtesgaden in Bavaria.

An incident recalled by S/Sgt. Bill R. Harper, that included 1st Sgt. Alfred R. Barry, Lt. Leonard Lebo and Pfc. Omer LaFrance, revolved around the men getting their pay. "About half of one platoon hadn't been paid in a long time and we had the money for them."
explained Barry.  "The only trouble was that they were on an OP (Observation Post) directing artillery fire for the French. We called 'em and said: Hey, we got some dough for you guys - can we get up there?  They said we could, if we were crazy enough, so we started - four miles up a mountain road with a Frenchman showing us the location of German mines.  The OP was located like this - 200 yards to the right were French Ghoums (Native Moroccan soldiers) and 200 yards to the left were the krauts (Germans). Both sides were having a big time throwing the stuff back and forth over the heads of our guys.  Well, we worked the payroll deal this way. The three of us laid down by the jeep and the guys would crawl down from the OP one at a time. LaFrance called their names on the payroll, the Lieutenant paid 'em off - then I'd collect from them for an old PX ration bill. Those gents claimed forever afterward that the only reason I came up there was to get that PX dough; it still doesn't do any good to deny it..."

The 601st received credit for a total of nine campaigns including Tunisia, Rome Arno, Rhineland, Ardennes-Alsace and Central Europe to name a few. Omer was discharged at Fort Devens, Massachusetts on July 10, 1945. He had reached the rank of Technician 5th Grade.

Omer returned home and worked as a machinist. In 1947, he married the former Frances G. Buckey and the couple made their home in Tolland, Connecticut. Omer and Frances had two daughters, Ruth Ann and Mary Kate. In his spare time, Omer enjoyed playing cards and pitching horse shoes. He was also a member of the VFW.

Omer passed away on March 3, 1994, and was buried in the Saint Bernard's Cemetery in Rockville, Connecticut. I want to thank Omer's daughter, Mary Kate, for providing the photos and information for this tribute.