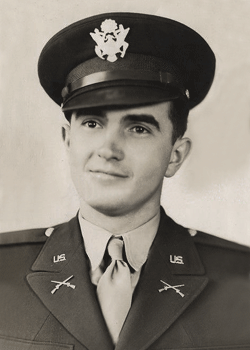 Biography:  Frank H. Egner was born on March 26, 1921, in Quakertown, Pennsylvania. He was the son of Frank L. Egner and Evelyn Schoup and attended local schools through the 12th grade. His enlistment record indicates that prior to the war, he worked in a machine shop or similar occupation.

Service Time:  Frank entered the service on September 5, 1942, at Allentown, PA. He was chosen for Officers Candidate School and graduated as a 2nd Lieutenant. He was assigned to the 808th Tank Destroyer Battalion, serving as a platoon commander in A Company.

The unit was sent to Camp McCoy, Wisconsin, for winter training and although not mentioned in the unit history, it seems that at least some of the men spent time on maneuvers in Michigan. The photo below showing Frank holding a Thompson Sub-machine gun was marked as during those maneuvers and dated February 15th to March 13, 1944.

The 808th shipped out from the New York port on November 30, 1944, and arrived in England on the 22nd. They disembarked at Utah Beach on September 19th, and entered the line east of the Moselle River six days later. They remained there until transferring to the Ardennes on December 21st. They then protected the XII Corps flank through January, 1945. The 808th converted to the M36 in February and supported the drive to the Rhine, in March, and the river crossings south of Boppard late in the month. They joined Third Army’s drive through Erfurt, Nürnberg, and south into Bavaria, advancing to Linz, Austria, in early May. 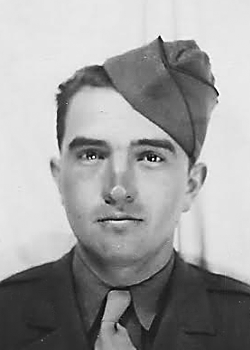 The unit received credit for campaigns in Rhineland, the Ardennes and Central Europe.

Frank returned home to Quakertown and married the former Lois Heller who was also from Quakertown and was the daughter of Harold Heller and Audrey Hall. The new couple had a daughter, Barbara, and a son Jack. Frank found work with the Holton Foods Company in Frenchtown, New Jersey, as a Regional Manager, and remained with the company until he retired in 1983.

He was a member of the Quakertown Church of Christ and passed away on April 26, 1985. He was buried in the Union Cemetery in Quakertown. I want to thank Jeff Giambrone and the Egner family for supplying the photos and information for this tribute.